The Grand Canyon is absolutely in the top three of the most amazing places I have ever been. This spring break was only my second time hiking into the canyon, and it was my first time back country camping there. The first run was June 2010, the hottest part of the year. Going against all the warnings posted on the national park’s website, as well as on signs along the rim and trails of the canyon, I hiked to the river and back in a day. I was trying to use that amazing day to determine how difficult –or not– to make our trip this year and ended up on a steep learning curve.

Originally I hiked to the river along the shorter, steeper South Kaibab trail and hiked out on the Bright Angel Trail which is longer with a more gradual incline. Upon reaching the Colorado River, it was 107 degrees and would eventually reach 112. I couldn’t wait to plunge into the water. Generally, along the river the current is too strong to swim but there is, thankfully, a small bay that has a nice sandy beach and some shade. In my haste I threw my pack into a bush and jumped in fully clothed. In my mind I had reasoned that the Grand Canyon was huge, miles long, and with the weather being over 100 degrees the water was going to feel great. That was before I learned that the water making up this stretch of river comes directly out of the bottom of the Glen Canyon Dam and never reaches a temperature over 55. After facing the shock of instantly cooling by 50 degrees, I was out of there before I really knew what was going on and fully dry about ten minutes later.

I spent the heat of the day napping inside this bush before heading over to Phantom Ranch to see what I could see. Now–as a quick interjection–before starting this hike my parents offered to try to get me a cot or cabin in Phantom Ranch so that I could stay and complete my hike the next day. I turned them down because I had read that those slots fill up quick and don’t come cheap. My pride was also telling me, “hey, you’ve done longer hikes than this, don’t be a sissy.”

Naturally, I wanted to explore Phantom Ranch since it is the only settlement at the bottom and that was where I knew to refill my Camelbak. It’s a pleasant, shady walk from the river to the ranch and the trail leads directly through Bright Angel Campground (in the trees of the below picture). The trail also leads right past the start of the Utah Flats trail. Seeing this trail for the first time was unforgettable. It starts at the back of a campsite, goes through a bush and up into the canyon. This was the route I searched for to lead us into the back country this spring break. Little did I know it was “the banzai route”.

I learned a lot my first time in the canyon, and felt confident applying some simple facts to our hike this year. The day after my first hike, my body HURT and I have never been so stiff. Everyone on that trip laughed at me whenever I walked that day, including my grandma and relatives auf Deutschland (from Germany). I knew that we would need a day in between our hike in and hike out and when planning I figured that we could spend it exploring. We actually ended up using it to rest, recuperate and jump from shady spot to shady spot.
I have one last thing I have to add about our spring break, since Jess laid it all out in the last two posts. The Grand Canyon is cougar country. On my first hike down I ended up finding fresh tracks in a nearby alcove. The morning of our R&R day on the flats, I got out of my tent early to find a suitable place to relieve myself. To me, the canyon is intoxicating and I couldn’t get back to bed because the sun was about to come up so I went into the tent and grabbed the camera. I walked to the edge to get some awesome shots down canyon (1st picture). Behind me I heard the rocks crumble and fall. Something was walking on the ledge behind me. Nearly panicked, I started to raise my shirt above my head to make myself look bigger and prepared to start yelling. When I looked, there was a family of deer not 100 yards from where I stood. Relieved, amazed, I spent the rest of my morning sneaking closer to get some shots. 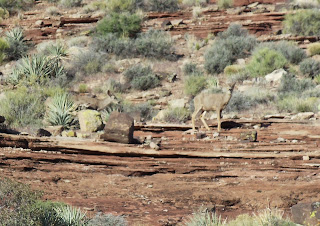 The Grand Canyon will never cease to amaze.