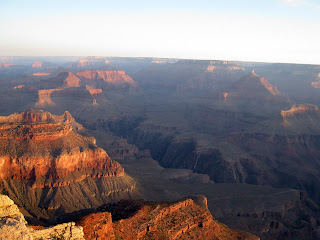 View into the Grand Canyon.
Hiking into the canyon, for the most part, was pretty easy. This had me worried. With every easy, gravity-driven step I took in, I could see a growing staircase forming behind me, lurking and snickering, waiting for my return. Even on the hike down, however, the canyon effects can be felt. The Grand Canyon is made up of three canyons, each progressive one taking you closer to the bottom, where the Colorado River flows. For a large portion of the hike down, though, you can’t see the river—making the bottom seem deceptively close. The “bottom” that I had been staring at for hours was actually the halfway point, a surprising oasis where we ate lunch, used bathrooms (a luxury in backcountry), and refilled water. 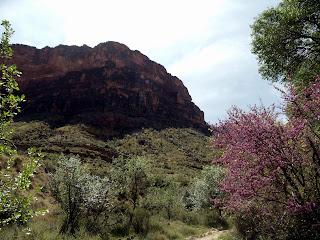 Near Desert View Campground, the half way point of Bright Angel Trail.
As you hike into the canyon (or canyons, I suppose), the temperature commonly increases about 10 degrees or more. While I’m writing this, the forecast is a high of 67F on the south rim and 92F at Phantom Ranch—a little cooler than when we hiked in. Combine this with full packs and the exertion of hiking, and by the time we reached the river, we were really feeling the heat. It’s common in the canyon for people to not realize just how hot their getting because their sweat evaporates immediately from their skin. This must have been happening to me, as I had a salty sort of crust around my eyes. Unfortunately, the river was so cold that we couldn’t hop in. The most I could do was dip my hair in for a quick rinse (it had been about 3 days since any of us had showered at this point), then walk back onto the sand to thaw my numb feet. 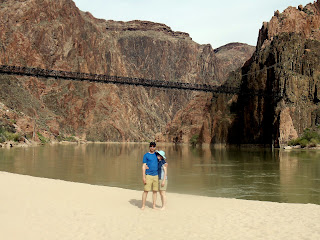 Andy & me at the bottom of the canyon.
It was lucky that we spent a little time relaxing at this beach, as we soon found we still had a long way to go. A little further along, in Bright Angel Campground, Andy found a ranger to help us figure out how to get to our camping destination, Utah Flats. We knew it was still a good bit away, and the ranger confirmed that—45 minutes, he said, and you’ll be there. Great hike.  An hour and a half later up a goat trail that altered between steep, crumbly gravel and large boulders, we climbed over the last ledge and tumbled into a pile of goo on the flats. (At least, I did.)
With the power of retrospect and internet now in my hands, I decided to Google Utah Flats… just to see what I’d find. Here’s the first line of the first site that came up: “This trail is also referred to as the Banzai Route and once you have come down it into Bright Angel Campground you will understand why. This trail is incredibly steep and you will feel like a World War II Kamikaze pilot making your final approach.” (http://www.bobspixels.com/kaibab.org/bc/gc_tr_uf.htm)
Ah well. 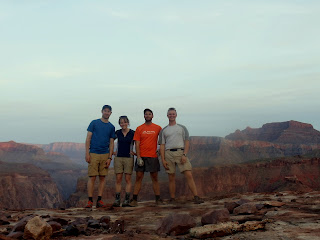 Andy, me, Scotty, and Jeremy after arriving at Utah Flats. 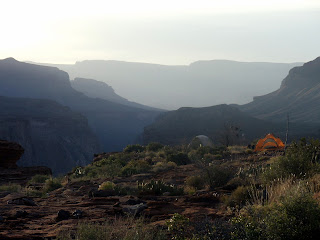 Our camp at Utah Flats—the perspective of the background might give you an idea of what we hiked up to get here.
We stayed two nights (with a rest day in between—whew) before hiking back out. Even in my head, I still can’t fully describe the experience of the hike out. It was horrible and long and weirdly fun. That lurking staircase was laughing at me the whole time, but I was tuning it out with my amazement that my body could handle what I was putting it through. Including breaks and our hike down from the flats, it took us about 11 hours to hike out of the canyon. My heart was beating fast and I was breathing hard from the exertion nearly that whole time. Strangely, the pack that caused my whole body to ache on the way down felt like it weighed nearly nothing on the way back up (it now had much less food in it, but still lots of water). And I couldn’t stop thinking of the Appalachian Trail… 1) That surely nothing on that trail could possibly be as hard as this and 2) That it would be the most amazing thing to wake up every day to just hike.
Jeremy and Scotty (much faster hikers than me) were waiting for Andy and me as we emerged at the top of the trail. We got a picture, experienced a brief wave of popularity as people around realized we’d just hiked out of the canyon, then walked victoriously to our car to find the cheapest, heartiest dinner possible. 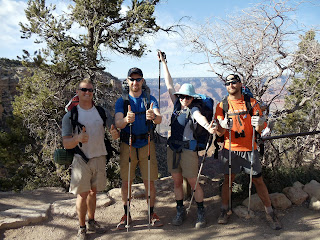 Victory at the end of Bright Angel Trail.
That evening, with temporarily full tums and the satisfaction of accomplishing something huge, we had the worst camping experience I ever had. Driving tiredly from a glass shard coated site to a creepy unmarked white van we finally settled on a site scattered with animal bones and what looked like a wad of human hair in a pile of firewood that had been left behind. With the exhaustion of the day and talk of sacrifices and cougars floating around me, I’m pretty sure I experienced my first bout of hysteria. But the nice thing about going on a trip like this with three guys is that I felt safe in spite of everything else.
On the return trip, we stopped at Four Corners and spent a day at Mesa Verde, one of the most incredible sites of human history I’ve had a chance to visit. We stayed at the local KOA (our only paid site of the trip) and had our first showers of the trip. It was also here that I (belatedly) decided that Andy and I needed a National Parks passport book. One stamp down… I guess we need to go back to Arches and the Grand Canyon! But maybe we’ll suck it up and reserve a hotel room the next time we hike out. J