When we were hiking out of the Grand Canyon, I would say I got hungry about every two hours. Heck, in a regular, non-active day I’ll sometimes eat four meals plus snacks if the food’s around. But I’m a fairly small person, so when I say ‘meal’… well, that’s about a third of what Andy considers a MEAL. So no matter how long I spend thinking through food plans for the trail, I can’t get past one thing—we’re going to need A LOT of food. Gah. Lots. And since neither of us is ready to incorporate Ramen and Little Debbie’s into our menu possibilities just yet, menu planning is taking some deliberation. Consider this: the average thru-hiker burns 6,000 calories per day. That’s over twice as much as most adults… plus you have to carry all of that food on your back and there is no refrigerator. And I’m not entirely sure you understand yet just how much Andy eats.
The best website that I’ve found to help with this, hands down, is http://www.backpackingchef.com/index.html. Between the dehydrator my parents got us last year (thanks, mom! (thanks Amy! ~Andy)) and the vacuum sealer we ordered a few months ago, we should be able to prepare some pretty great meals that will be easy & delicious on the trail. Don’t get me wrong, here—we’re not prepping every meal this way, but we are hoping to shake things up from Knorr instant noodles from time to time. And since water is one of the main components of many foods, dehydrating is going to be a huge help. Here are the big items we’ll be dehydrating over the next few weeks:
And if I can get past the fear of spoiling/have time…
Without the vacuum sealer, I’d never bother with dehydrating beef, but with it everything is supposed to be able to keep just fine. I don’t think we’ll attempt chicken, though. Poultry kind of freaks me out even in normal kitchen conditions (Google ‘uncooked chicken’ if you’d like to join me in that club), so we’ll probably go with something like canned chicken. I can’t say that idea exactly ignites my salivary glands, either, but Andy’s a big meat-eater, so we’ll need to find alternatives to 6 months of beef jerky and bacon bits.
Finding recipes has been somewhat exhausting (probably doesn’t help that I’m not exactly much of a cook even in normal kitchen conditions), so I’m including a link to the document of what I’ve accumulated. Hopefully at least one of you out there will be able to use this, too! Check out the sites in the document for more recipes, too.
We also have been stocking up on some basics that our parents will mail to us with some dehydrated food. Most of these we got at Costco & Walmart in bulk, and even with postage should these end up cheaper to send than to buy in smaller quantities along the way. Some of the things we got: almond snickers, trail mix (we’re adding things like dehydrated fruit to pre-made mixes), Nature Valley protein bars & granola bars, granola cereal, dehydrated milk, Gatorade mix, hot cocoa, ibuprofen, & vitamins. There’s a huge debate out there over mail drops vs. buying food along the way, but I think it’ll work out well for us to do a mix of both.
Also, I’ve had a few questions about how to mail things to us along the way–we’ll be posting mail drop addresses & ETAs as we’re on the trail, so stay tuned!
Before you go, I want to give you a visual taste of the wonder of dehydration.
Before: 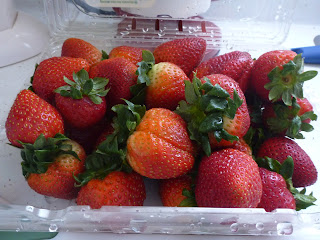 Prepped (in the Rockies dehydration times have been cut almost in half for most things—these only took a few hours): 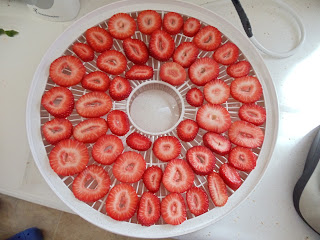 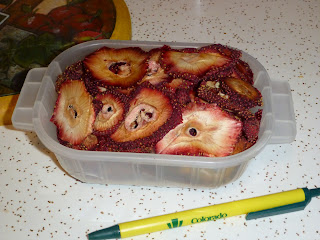 The end product has intensely amplified flavor, and isn’t really anything like the sugar-coated dehydrated fruits you get at the grocery store. It’s kind of like comparing apple cider to apple juice. Or orange juice to Sunny D.
Click here to download my compiled recipes! (This will take you to our Google site)