One of the things I had some trouble with in my initial gear hunt was that there seemed to be so little information on hiking gear for women. Even when I looked at sites like REI, the reviews were largely complaints about things like the color not matching the photo on the website or the fit not being flattering enough in the bust area. I wound up doing a lot of searches for the men’s equivalent of what I wanted, as I found the odds of finding technical reviews to be much higher.
Eventually I stumbled on the mecca site of AT hikers: whiteblaze.net. It doesn’t look like much at first, but this is a gold mine of hiking information. AND it has a forum dedicated just to women. This has been a huge help with gear & prep questions I’d been pondering, many of which guys are unlikely to consider (except, apparently, for the random creeper who chimes in on the forum).
Our gear is very nearly finalized now, and much like Andy, there are some things in there that are just so awesome I have to stop myself from using them too much before the trail. Here are my gear highlights: 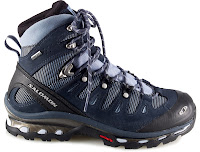 One thing that recently changed in my gear plans—when we were hiking into the backcountry in Arches, I felt this shocking chill on my backside. My Camelbak was leaking so badly that water was dripping from my pack. I had never had trouble with it before, but between it being full and the contents of my pack pushing on it, I guess it couldn’t hold up. Apparently this problem isn’t uncommon with their new latch design; Andy has the older version, which doesn’t leak but is next to impossible for me to open. So I swapped it out for a Platypus Big Zip. One thing I already have to say I like about it is the detachable hose. This means you can pull the bladder out of your bag without dealing with pulling the tube back through the pack. In any case, I hope this is a good alternative!